A confined space does not necessarily mean a small, enclosed space. It could be rather large, such as a ship’s hold, a fuel tank, or a pit.

Although a confined space is obviously dangerous, the type of danger is often hidden. For example, a confined space with sufficient oxygen might become an oxygen-deficient space once a worker begins welding or performing other tasks.

These are some of the reasons confined spaces are hazardous:

Before entering any confined space, you must test the atmosphere to determine if any harmful gases are present. There must also be radio contact with an attendant outside the confined space and a rescue team at the ready in case of an emergency. 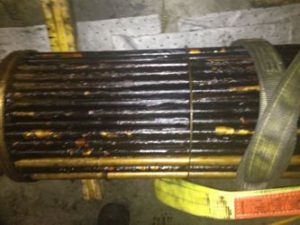 Your lube oil temperature needs to be lower at startup and shutdown than at full
speed.

Your turbine’s rotor does not actually ride on the surfaces of its bearings. It rides on a thin film of oil between the rotor and the bearing. At high turbine speeds the rotor hydroplanes across the oil, eliminating contact with the Babbit of the bearing. The heat generated by the turbine decreases the viscosity of the oil and increases its “slipperiness”, which is important at high speeds. As the rotor slows, the oil needs to be more viscous to repel the force towards the bearing.

Failure to lower the lube oil temperature (and therefore increase viscosity) can result in light bearing wipes or smearing.  These conditions would occur during turning gear operation, unit startup and unit coast down during shutdown.  The ideal lube oil temperature at these lower speeds is 90 degrees F.  Of course, oil temperature can also be too cold on startup, similar to trying to start your car on a cold winter day. Operational personnel are ultimately responsible for maintaining this lower lube oil temperature by regulating water through the lube oil coolers.

Maintaining lube oil cooler cleanliness is also very important. The tubes must be clean for efficient transfer of heat. The bundles should be cleaned every two (2) years.  Lube oil coolers are the single most common area for contaminants to hide. These contaminants can also lead to bearing failures, as discussed in an earlier Turbine Tip.