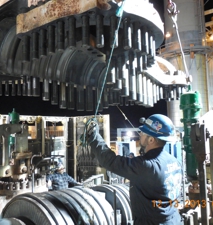 A young construction worker was killed the same day his wife was coming home from the hospital with their first child. How did this occur? A crane was transporting a heavy, bulky section six or seven feet in the air to clear other objects. The load was guided by tag lines which were used by all of the workers except this young man. Although warned by his foreman to use the line, he didn’t. A lifting pad gave way and he was killed instantly.

Let’s face it, our job is dangerous within itself – we don’t need Murphy’s Law in the mix as well. Be aware of the load at all times, no matter how large or small it is. Remind yourself of this slogan the next time a load is lifted – “IF IT’S IN THE AIR, IT’S DANGEROUS”.

Let’s review some of the rules that can help keep us from getting injured by failing loads: