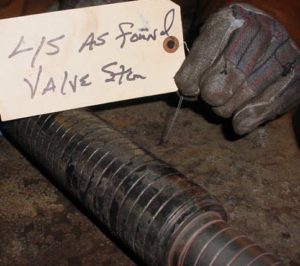 At STUG 2015, a survey revealed that 43% of D11 combined cycle users perform valve freedom testing on a daily basis, while 38% perform it on a weekly basis. The potential accumulation of deposits is a little more critical in these high temperature units, but exercising valves is important on any unit. For instance, on a recent 40MW forced outage, TGM® serviced a stuck Emergency Stop Valve that was exercised every week. How does one determine the “safe” frequency?

First a little background: We stroke valves to make sure debris and contamination have not blocked the operational clearance between the shaft and its bushing, preventing freedom of the valve to operate. A binding Main Stop Valve (MSV) in an emergency shutdown or trip could cause an overspeed condition resulting in extremely high vibration and equipment failure – even possible personal injury or death. Main steam valves should have a closing time of at least 2 seconds. Non-Return Valves (NRV) also need to be exercised on a regular basis to prevent water induction. This occurs when cooler steam condenses in the pipes and feeds back into the turbine. Water induction can cause serious damage, often referred to as a turbine rotor short condition.

Boiler chemistry plays an important role in the build up of deposits. This issue was covered in a previous Turbine Tip HERE.

In higher temperature units, there is a potential for binding of valve shafts due to exfoliation (blue blush) build-up from either the superheater tubes or reheater tubes in the boiler. Blue blush is a common problem on units that have a single axial type of design or an HP-IP type of configuration with elevated steam inlet temperatures. The HP-IP design not only affects the main steam inlet valves but the reheater valves as well. These HP-IP designs commonly operate at 1,000 degrees F inlet steam temperature at both the main steam inlet and reheater locations. This build-up of blue blush comes in from the walls of the superheater tubes or reheater tubes in the boiler and fuses onto the stems or shafts (also bushings). This exfoliation closes up the operational clearance between the shaft and its bushing, resulting in potential binding of the shaft and preventing freedom of the valve to close in an emergency shutdown or trip.

Another result of exfoliation (or any other hard particle steam contamination) is erosion
which can damage valve parts, nozzle partitions and the blading (buckets) themselves. Elevated temperatures of the steam can also cause valve shafts or stems to distort and bend, resulting in additional binding problems. With temperatures such as 1050 degrees F, creep is apt to take place more rapidly than a 1000 degree F application. 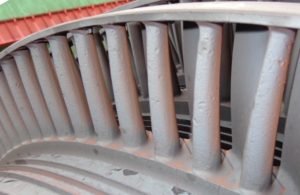 To reduce the chance of binding, OEM’s have increased the operational clearances for these high temperature machines over the design’s original upper limit. These clearances can be achieved during major inspections. Any blue blush (exfoliation) will be removed by sandblasting or by hand with emery strips (fine sandpaper grit). Stems (shafts) can be used over again and this blue blush build-up once cleaned can also be helpful in maintaining the desired clearance between shaft and bushing components.

Now we have a handle on the parameters for determining the frequency of valve freedom testing: Higher steam temperatures, current boiler chemistry, closer stem/bushing tolerances, measured stem runout, and the degree of existing blue blush build up all play a role. If production and manpower are not issues, we recommend daily freedom testing. However, if these issues are a concern, you will have to measure the risk of less frequent testing against these parameters.

If you do not feel comfortable making this decision on your own, the TGM® Running Condition Assessment (RCA) can help. The assessment looks at the condition and performance of the unit while it is running, which means there is no loss of generating capacity and the assessment is easy to schedule. We assess your boiler chemistry and blue blush build up, and consider your operating history and previous outage findings, including as-found and as-left stem/bushing clearances from previous inspections. An opinion on the frequency of valve freedom testing is but one result of the RCA. In addition, TGM® can employ an arsenal of cost-effective testing equipment and inspections to glean a wealth of information about the actual operating condition of the turbine, the generator, and all the ancillaries. TGM® analyzes this data and generates an informative report which assesses potential failure modes and weighs their effect on generating capacity and potential outage duration. Remedies and operational changes are ranked from “easy to implement with maximum benefit” to “hard to implement with minimum benefit”. Operators can then make the most informed and economically-sound maintenance decisions possible.

Click the link HERE for more information on the TGM®Running Condition Assessment.