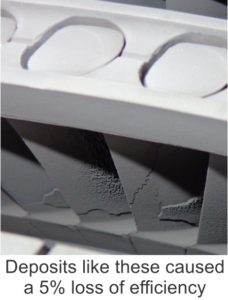 Contaminated steam can seriously impair the performance and reliability of the turbine. Dissolved minerals can cause an accumulation of deposits on surfaces, impeding fluid flow. A deposit thickness of only 3 mils on the convex surface of buckets can cause an increase of 1 to 2 % in the fuel bill and a 1% reduction in peaking capacity. (See the companion article HERE.)

Deposits can also restrict mechanical operation. A non-operating valve can allow an overspeed event. Other contaminants can induce stress corrosion cracking (SCC) which can result in catastrophic failure of components. SCC is the growth of microscopic cracks in normally ductile metals under tensile stress in a corrosive environment. SCC can be very difficult to detect. The metal surface can appear unaffected while the subsurface is filled with microscopic cracks. High-tensile structural steels, stainless steels and even mild steel can be susceptible to SCC in the presence of chloride, alkali or nitrate contamination of only a few ppm (depending on the steel and the contaminate). SCC is extremely dangerous as it can lead to disintegration of the affected part, including discs, rotors and turbine shells.

Boiler feedwater can be a mixture of makeup from primary treatment, condensates returning from the turbine and condensates returning from process steam. Each of these can contain its own share of contaminants. A boiler can accept this feedwater and still produce steam containing less than .05 ppm of solids. However, this feedwater should never be used for attemperation as the contaminates will be introduced straight to the turbine. Water for attemperation should be close to distillate quality.

Dissolved solids from boiler chemicals should be separated from the steam before it leaves the drum. Operating the boiler with too much water in the drum, or with foaming or priming in the boiler, will introduce too much water into the steam separator and reduce its efficiency. Efficient separators can approach less than .01 ppm of solids in the steam. Dissolved gases such as ammonia or CO2 cannot be separated and must be controlled in the boiler water.

Extreme care should be exercised when using volatile acids (such as hydrochloric acid) when cleaning the the condenser. Acid fumes entering low pressure areas of the turbine can condense in confined areas such as blade roots and cause stress corrosion. The proper procedure is to close the joint between the condenser and the low pressure areas with plastic or fabric to form a vapor barrier. All remaining acid should be neutralized and removed from surfaces.

Contamination can also be introduced during inspection and repair of a turbine. Manufacturing fluids, lubricants and preservatives can contain sulfur or chlorine which can decompose into acids. Machined areas and replacement parts should be cleaned with solvents (such as denatured alcohol) and then dried off. NDE/NDT chemicals, especially the dye penetrant Zyglo, can also decompose into acids. Parts inspected with these methods should also be solvent cleaned and dried. Environmental pollutants can introduce solids (dirt) and acid forming compounds. Exposed turbine steam path components should be protected by plastic or cloth until reassembled.

Potential turbine contamination by either deposits or acids should be addressed as soon as it is suspected. Several methods for confirmation and ameliorization are available, depending on the type and degree of the contaminant.

Please contact Mr. Turbine® for advice if you suspect or encounter turbine contamination.